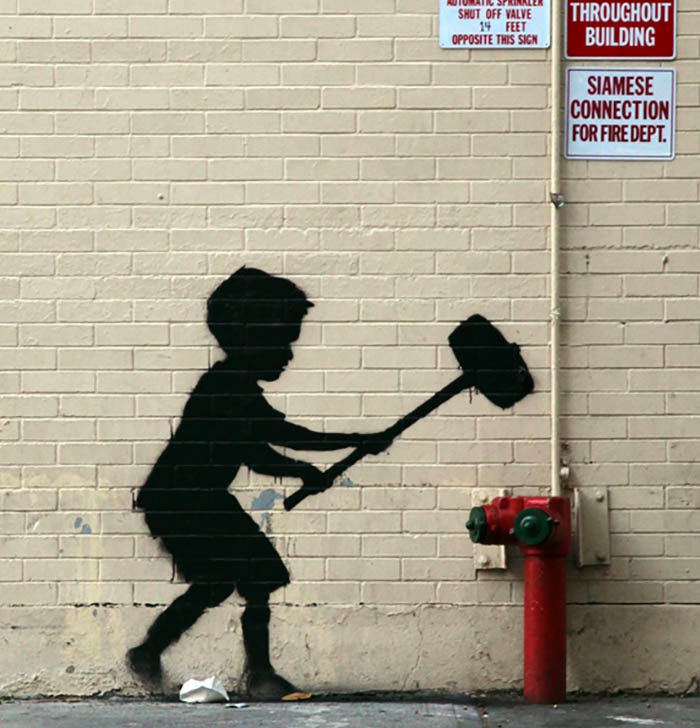 You probably heard about Chelsea as  the greatest aggregation on art galleries. Indeed every second door of the Chelsea’s townhouses are entries to art galleries! It is really impressive that in this big city of people that always in rush, art is very appreciated though. However, though this one district is considered to be the official NYC art district you can find the art in every other places, on each street, each corner of Manhattan.

Indeed, the heart of NY is full of breathtaking murals in places that you could never expect! Well… no wonder since the city is the second home city for Banksy. Yep, this Banksy. Most of his incredible works that he was working on for 31 days, we can still encounter in many New York City’s corners! I will never stop admiring this real artist who as the first person made New Yorkers stop, guess and talk about art so widely!

Thanks to him the art came to people who never wanted to come visit the art in Chelsea for example! Each tag of Banksy is followed by millions of people and media as well. Yes, this is real art, something that make you stop and stare and doesn’t let you walk on by. My very favourite work of Banksy is on the Upper West Side on the corner of the 79th Street and Amsterdam Avenue. The mural shows “Hammer Boy”. If you don’t know what I’m writing about, check it out directly!! It’s a shame not to know the masterpiece! By the way, during my trip across Europe last summer I remember I have been to Poland to do trip to Auschwitz.

The concentration camp is quite near Krakow so I stayed there for a night and have a whole day to sightsee the city at least a little bit. And what impressed me highly was Podgorze neighbourhood where apparently someone like Banksy has left his tracks.  Hopefully I’m not wrong, it was Blu. He was born in Senigallia and used to live in Bologna throughout his life unless he was on the road. And it must be said that he was on the road almost all the time. He used to travel to another countries and never did he left a place untouched! They say in Krakow he left a few murals but we were lucky to find only that one in Podgorze. Unquestionably, the next time I’m in Poland I’m gonna find all Blu’s murals!